Start-up failure is common and is sometimes difficult to accept when the company has been one’s personal journey. But understanding the reasons behind the failure is the critical part for every entrepreneur. According to CB Insights, almost 50% of Start-ups fail because a lack of market need (ie: there is no real market for the product or service) whilst they estimate that almost 30% of them fail because of cash-strapping. But what to me is interesting in the current world of sky-high valuations (see A start-up’s valuation life cycle) and easy-money out of Sillicon Valley VCs and Sovereign Wealth Funds (SWFs), is death by overfunding: how some start-ups are failing because of how much money they raise and the bad decisions all this cash pushed the managers to take. 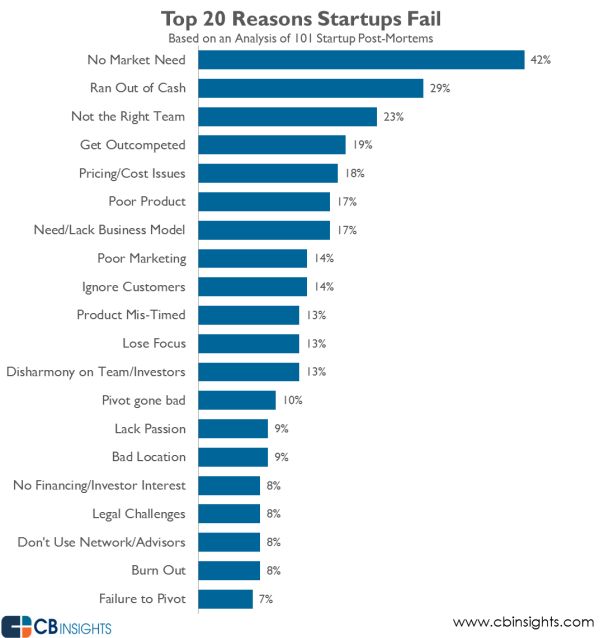 Death by overfunding is an extreme example of how unsustainable valuations, combined with easy money can take down a start-up, even a good one. It is clear that money is pouring into VCs and Private Equity Funds, as well a SWFs, as investors are yield-hunting away from bonds. Heaps of easy money, when combined with these valuations, can draw a start-up to launch into unjustified expansions or be more aggressive that would have otherwise made sense. Being pushed to quick decisions and rushed plans can derail even the best of start-ups. It is always important to first certify the business model, get the right team in charge and then raise money in accordance with revenues and growth. If these things have not happened, there is a good chance that the company might see itself in a dark pit at some point, having burnt heaps of cash and no revenues to show for it.

Reuters on Jawbone’s Death by Overfunding

As an investor and a manager in a start-up, I prefer to take things rather slowly. I like to prove the business model first (in particular the funding aspect) and develop the operational and technological skeleton whilst using as little VC money as possible. And only then, embark on an expansion plan that can leverage both the existing knowledge, experience and systems that have already been developed and proved.

I see no point in raising vast amounts of money and launching aggressive expansion plans, unjustified ones, when the original model has not been proved. It is a recipe for disaster and will take start-ups to a cliff they might not be able to stay on.